Chinese inflation and trade data for March will hit the markets early on Thursday and Friday respectively. Expectations are for a rebound in all these figures, something that could allay some concerns around a further slowdown in the world’s second-largest economy, and thereby benefit the China-sensitive Australian dollar.

After a marked slowdown in recent quarters, China’s economy has finally started to show some signs of stabilization in March, with the official and Caixin PMIs rising notably across both the manufacturing and service sectors. Hence, investors will be looking for a meaningful rebound in the rest of the data as well, the first set of which is published this week.

In particular, consumer prices as measured by the CPI are forecast to have accelerated to 2.4% in annual terms, from 1.5% in February. Producer prices, which tend to have a bigger impact on global financial markets as they are considered a gauge of Chinese factory demand, are projected to have risen to 0.4%, from 0.1% previously. 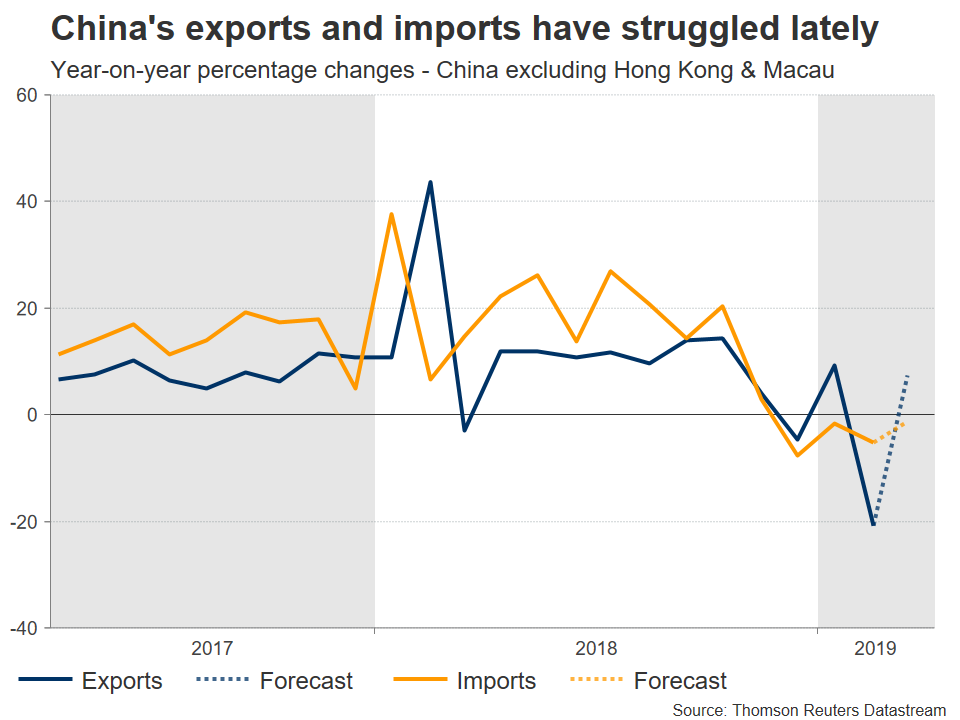 As for Friday’s trade data, the nation’s trade surplus is anticipated to have widened in March, as exports are forecast to have outpaced imports. Specifically, exports are expected to have risen by 7.3% in yearly terms, a rebound following an abysmal 20.7% drop previously. Meanwhile, imports are predicted to have fallen again but at a slower pace of 1.3%, compared to a 5.2% decline earlier.

If the actual prints meet expectations, or better yet beat them, that could help calm some nerves around the economy’s prospects, and by extent boost both the yuan and the Australian dollar. Australia and China have a very close trading relationship, so the aussie is often considered a liquid proxy for ‘China plays’. Speculators often favor the aussie over the yuan not only due to liquidity, but also because shorting the Chinese currency for instance implies taking on the additional risk of being caught on the wrong side of regular FX intervention by the nation’s authorities.

On a final note, what signals come out of the US-China trade talks will also be crucial for the aussie. Officials on both sides have consistently played up the prospect of a deal, something that has likely been a major force in pushing equity markets higher, and helping the aussie to stay resilient even amid growing RBA rate-cut bets. The bottom line is that lots of trade optimism is likely priced in already, which presents a downside risk for both stocks and the aussie going forward if this cheerful narrative changes for any reason.

Taking a technical look at aussie/dollar, resistance to advances may be found near 0.7170, the March 21 high, with an upside break opening the door for the 200-day simple moving average (SMA) at 0.7197.

On the flipside, immediate support to declines could come near the 50-day SMA at 0.7115, with steeper bearish moves aiming for 0.7050.

Legal disclaimer:
The material does not contain a record of our trading prices, or an offer of, or solicitation for, a transaction in any financial instruments. XM accepts no responsibility for any use that may be made of these comments and for any consequences resulting in it. No representation or warranty is given as to the accuracy or completeness of this information. Consequently, any person acting on it does so entirely at their own risk. The research and analysis does not involve any specific investment objectives, financial situation and needs of any specific person who may receive it.

It has not been prepared in accordance with legal requirements designed to promote the independence of research, and as such it is considered to be marketing communication. Although we are not specifically constrained from dealing ahead of the publication of our research, we do not seek to take advantage of it before we provide it to our clients. We aim to establish, maintain and operate effective organisational and administrative arrangements with a view to taking all reasonable steps to prevent conflicts of interest from constituting or giving rise to a material risk of damage to the interests of our clients. We operate a policy of independence, which requires our employees to act in our clients’ best interests and to disregard any conflicts of interest in providing our services.

CFDs are leveraged products. CFD trading may not be suitable for everyone and can result in losing all of your invested capital, so please make sure that you fully understand the risks involved.