A snapshot of other markets are showing:

The production capacity utilization data however was unequivocally weak. The industrial production fell -0.84% (unrounded) which was the sharpest fall since 2009.  Capacity utilization also fell sharply to 76.7% from 77.5% last month. The data may have been influenced by the GM strike (and all that comes with it).  However, it certainly is worth monitoring going forward.

That combination of data helped to lower the estimates for GDP growth for the 4th quarter from the NY Fed to 0.4% and for the Atlanta Fed to a similar 0.3%. Now it is still early and once again, the GM strike is a contributor to the weakness, but it certainly raises an eyebrow.

So how did the market respond?

Well, for stocks hows about record closing levels, and all time highs at the same time. Moreover,  each of the 3 major stock indices closed pinned against their highs for the day.  You can’t get any better than that.  European shares, sans the Portugal PSI20, also closed higher on the day.

If the economic data was a catalyst, the evergreen story of progress with the US/China Phase I trade was good enough once again.  Pres. Trump also announced new healthcare price transparency and said that a new middle class tax-cut would be enacted the Democrats lose control the House.

In the forex market today, the AUD retraced some of the losses from the fall on Thursday caused by the weaker than expected employment report. It was the strongest of the majors today.  The JPY, which was the strongest of the majors yesterday on flight to safety flows, was the weakest today on flight out of safety flows into risk.   Such is the ups and downs inherent i market that gets it’s catalyst from the ubiquitious US/China trade negotiations.

As for the USD, the greenback moved lower helped by a rising EURUSD which extended the very narrow weeks trading range.  The prior high was 1.10426. The price moved up from a low of 1.1014 to an intraday high of 1.1057 before coming off a bit into the close.

The other catalyst  (other that than the decline vs the AUD) was the  GBP which saw a push higher after a report that the Brexit Party would step out of 43 additional seat elections where the Tories came in second in the last election.

That brings to total of seat elections they won’t field a candidate to 360.  The hope is the Brexit Party voters will vote Tory and push the party over the majority (i.e., no hung parliament).  The clock is ticking to the December 12 election (27 days to be exact).

Below is a snapshot of the rankings of the strongest to weakest for the day. 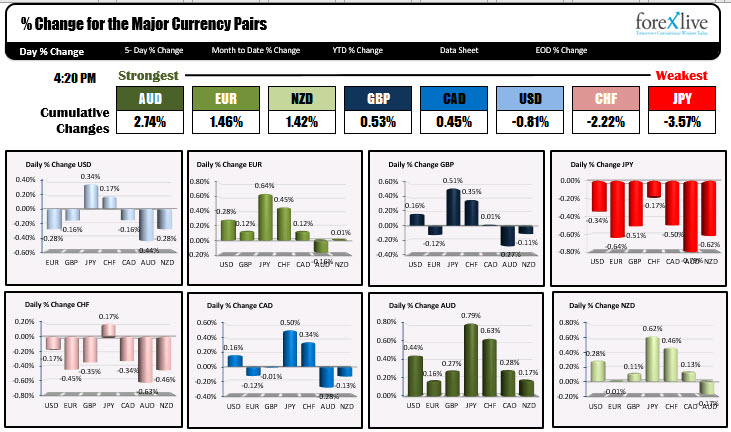 What did the strongest to weakest rank look for the week?

The NZD nudges out the GBP for the strongest of the major. The NZDs catalyst this week was the surprise “no change” by the RBNZ at their policy meeting. The expectations was up to 75% that the central bank would cut. Imagine if the Fed did that at a meeting?  Wow…

The AUD was the weakest despite the strongest of the majors today.   Below is a snapshot of the rankings for the week. 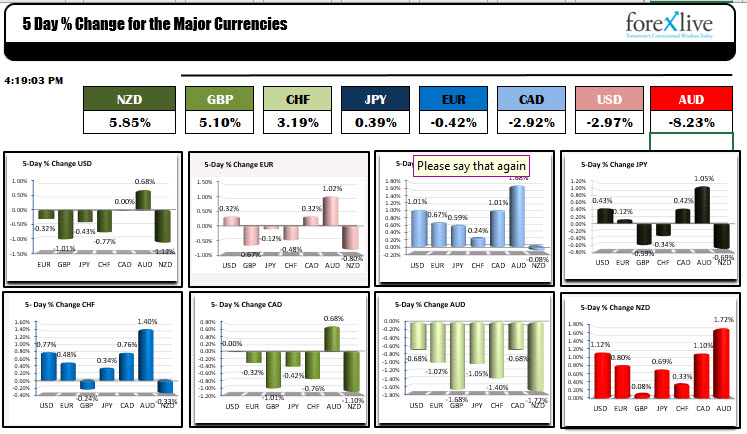 That’ll do it for the week.  Thanking you all for the support. Adam is back on Monday (Yippee!).  Have a safe and joyous weekend.  May your favorite team win!