The dollar moved higher today as stocks were a wobbly despite the Nasdaq trading to yet another new record level. The S&P and Dow did not do as well as each declined on the day.

Some concerns about coronavirus numbers contributed to the worry.  The CDC reported a near 29% increase in the number of cases. The number of deaths rose by 6.3%.

Later in the session, presidential candidate Biden outline some of his economic plan, and sounded a bit more Berniie Sanders/Elizabeth Warren vs. a more centrist Democrat (“ending the era of shareholder capitalism” was a specific comment that helped to send stocks lower).

Although Biden holds a large lead vs. Trump, there is plenty of time left until the election. Keep in mind that should Biden falter, and Trump coming from behind with incentive to keep the stock market buoyant, the declines may still be limited.

Another indication of the worry in the market comes from the debt market which saw heavy demand in the auction of 30 year debt today. The WI at auction time was trading at 1.357%. The high yield came in well below that level at 1.33%. The 30 year yield ended up moving even further lower to 1.308% near the close. That was down -9.1 basis points on the day. The 10 year yield was also lower by -5.7 basis points and the 5 year yield is closing near a record low at 0.279% currently.

Ranking the major currencies from the strongest to the weakest, the JPY and the USD are ending the day as strongest. The NZD and the AUD are the weakest (risk off type flows). 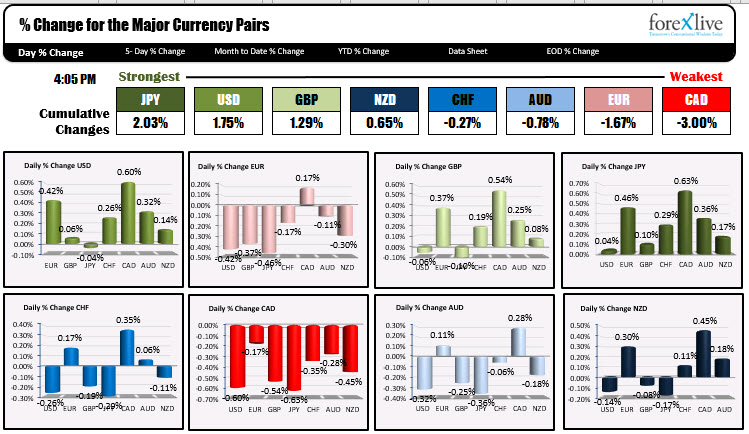 Crude oil prices tumbled by $1.41 or 3.45% to $39.49. The fall was attributed to economic concerns from coronavirus mainly.  Recall also from yesterday that the inventory data showed a much higher than expected build in inventories (over 5 million barrels).  Prices move higher yesterday but lost the traction today.

Not showing flight to safety characteristics was gold today. It seems to be out of sync a bit. Earlier in the week when stocks were rising with risk on flows, the price of gold was also rising on safety flows.  Today with some safety worries, trading lower. Go figure. The price of spot gold is currently trading down $5.26 or -0.29% to $1803.64. The high price extended to $1816.15. The low price fell to $1795.74.

On the economic front during the New York session, the initial claims continue to show sharp increases. The number of claims came in at 1314K. Although it was less than the expected 1375K, having numbers of that magnitude are still worrisome for the jobs market. The continuing claims were also a bit stronger than expected but still at a high 18062K level.

Some technical levels 2 high in the new trading day: