A snapshot of other markets is showing:

As traders in the US called it quits at midday due to the July 4th holiday tomorrow, it did not curtail the stock market from going out with a bang.   Each of the three major stock indices closed at record levels.   The S&P has now put together three consecutive record closes. The Nasdaq and Dow joined the S&P with their own record closes.

Below is a snapshot of the % gains of the major indices in the US as well as the solid gains in Europe (led by Italy which benefitted from a last minute reprieve on their budget negotiations with the EU).  The pattern stock closes is each indice closing near or at session highs.  Let the fireworks begin.

Helping to propel the stock market higher today, was not necessarily based on good news.  Instead it was lackluster numbers out of the US, that in turn had investors a little more confident that the Fed would not leave the July FOMC party without a cut (with more to come).

If the stocks hit the trifecta, the data was not that great across the board. In fact, the Atlanta Fed cut their estimate for 2Q GDP to 1.3% from 1.5%. That is down from 2.1% just a few weeks ago.

The weaker data sent US yields lower with the longer end leading the way.  The bond market closed early as well and will be closed on Thursday as well. The 10 year felll to a low of 1.9378% intraday and closed at 1.9498%. That is the lowest level since November 2016.

Although US yields are lower, the European yields were hit even harder.  The Italian yields led the way on the back of a last minute reprieve from European Commission saying that there would be no proceedings against Italy over debt. The Italian 10 year BTP yields fell over 25 bps.  German and France yields remain below the 0.0% level.

The lower European yields (relativel the US) helped to send the EURUSD lower in the NY session. The pair did first move above the 1.13000 level (which triggered some minor stops up to 1.1311, but that run higher was rejected and the price moved back toward the lows near the 61.8% retracement of the move up fom the June 18 low at 1.12689. That level will be key in the new trading day with the 100 day MA at 1.12589 another key target.. The price last traded below the 100 day MA on June 20.

The GBP was the weakest of the major currencies today (see ranking of the strongest to weakest in the charts below). As a result, the GBPUSD is ending lower. However, technically it remains in a channel heading into the new day with a topside trend line at 1.2592 and a lower trend line at 1.2532 (and both moving lower. The pair was lower on the day but traded in an up and down range between 1.2657 and 1.2590 in the NY session.

Finally, the AUD was the strongest of the majors and saw it run above and away from its 100 hour MA at 0.6998 to and through the Monday high and the 100 day MA at 0.7032.  The high for the day reached 0.70385 – so there is a chance of a failed break for the pair. However, until the price moves back belowt he 100 day MA (and shows signs of staying below), the sellers remain in control. 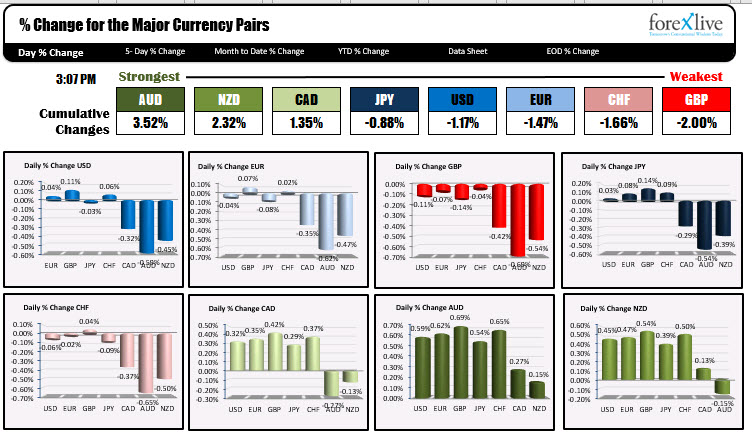 That’s it for me. Hope you all have a great Thursday. I will be cooking something on the grill and enjoying the fireworks.  Be back on Friday.

Forex Today: Fear takes over as Europe heads into another economic downturn – FXStreet

Here is what you need to know on Thursday, October 29:  The greenback soared to weekl…