A snapshot of other markets currently shows:

The market has been waiting and preparing for the unemployment shoe to drop. It drop toward with the April jobs report showing that -20.5 million jobs were lost in the month. The unemployment rate moved up to 14.7%. However, the BLS said that the number would have been 5% higher were not for a large number of workers being classified as employed but absent.

The New York Fed GDP estimate should the impact in their model for 2nd quarter GDP. They now see growth at -31.22%.

Despite the sharp fall, it could’ve been worse (and will likely be worse come the May report)

US yields moved lower off the report with the 2 year trading to yet another record low at 0.103%. However, the price rebounded into the close and the yield is backup to 0.157% just off the highs for the day at 0.159%. The other issues on the yield curve (i.e. 5 year, 10 year, 30 year) are all trading higher on the day, and near the session high levels as well.

This week, the Fed funds futures contract started to price in negative interest rates in the US in late 2020/early 2021. The December 2020 contract joined the later contracts in pricing over 100.00 or below 0.0% intraday.   Next week Fed’s Powell will be speaking in his comments on negative interest rates will be of importance to the markets. For now with the backup in rates, there is a brief relief from that idea.

For the day, the dollar – in a bit of a delayed reaction after the jobs report – moved lower.  Heading into the London fixing (11 AM ET), the USD moved to session lows vs the EUR, GBP, CHF, CAD, AUD and NZD.  The only currency that the dollar remained up against was the JPY.

For the EURUSD, the pair rose to test its 200 hour MA at 1.0870, and found willing sellers. The price rotated lower and is closing the day around its lower 100 hour MA at 1.0836. Next week, traders will use that MA as a bias defining level for both the buyers and the sellers.

The USDJPY – as mentioned – stayed more supported (lower JPY) and the JPY is ending the day as the weakest of the major currencies (see the rankings below).  The pair did fall (higher JPY) around the London fixing, but found support in the area that defined the swing lows from April at 106.35-44 (the low reached  106.384 after the employment report). The subsequent rise took the price up to test the 50% of the move down from the April 30 high at the 106.735, before rotating lower into the close toward the 200 hour MA at 106.594.   In the new week, if the price can stay above the 200 hour MA, the buyers will be more in control. A break below will tilt the bias to the downside. 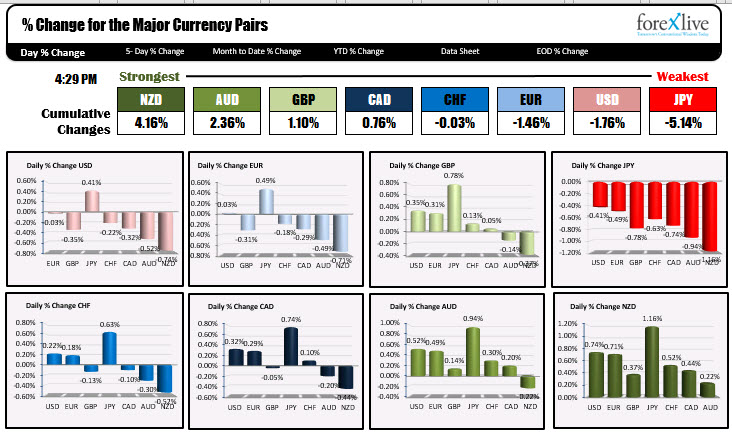 For the AUDUSD, it had an up and down trading day but is closing closer to the highs. At the session highs, the pair cracked above the 100 day MA at 0.65366, but momentum could not be sustained.  The AUDUSD pair is close the week at 0.6530 – below the 100 day MA but only by about 6 pips. Next week, that MA will be the key bias defining level for the pair.

For the week, the AUD is ending at the strongest of the majors. The EUR was the weakest. The USD was mixed with gains vs the EUR, GBP, and CHF and declines vs the AUD, NZD and CAD. The dollar was near unchanged (down -0.2% vs the JPY).

The charts below show the % changes of each of the major currencies vs each other for the trading week and ranks the cumulative changes for each currency. 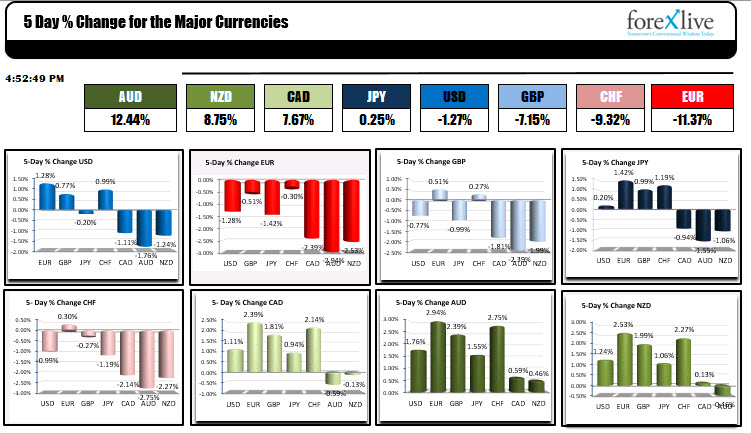 In the US stock market this week, the big development is that the Nasdaq closed the week in the black for the year. The 8972.60 level is the closing level for 2019. The price for the index closed at 9121.32.   For the week, the US indices closed at/near session highs. The small-cap Russell 2000 index out gained the major, more capitalized major indices.

Thank you for your support.  Have a great weekend

Technical analysis can be applied to any market – including stocks, bonds, commodities, currencies …