South Korea’s foreign exchange reserves reached a new record high in July mainly due to the strengthening value of non-dollar assets against the U.S. dollar.

The country’s forex reserves amounted to $416.53 billion as of the end of July, up $5.77 billion from a month earlier, the Bank of Korea said Wednesday. This was the fourth consecutive month of increase in reserves and the highest-ever, breaking the previous record of $410.45 billion in June.

The rise was largely driven by the weakening of the U.S. dollar, which pushed up the value of foreign exchange assets held in other currencies, and higher revenue from the bank’s foreign exchange operations, said the central bank.

As of end-June, Korea held the ninth-largest foreign exchange reserves in the world. 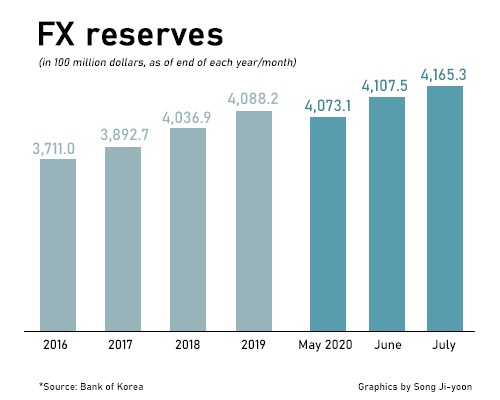 Foreign exchange reserves held in securities including government, public entity and corporate bonds increased $6.79 billion from the previous month to $379.38 billion in July, accounting for 91.1 percent of the entire forex reserves. Deposits at banks decreased $1.18 billion to $24.86 billion.

The special drawing rights from the International Monetary Fund (IMF) rose by $50 million to $3.13 billion, and reserve portion at IMF was up $120 million at $4.37 billion.

Gold reserves were unchanged at $4.79 billion.