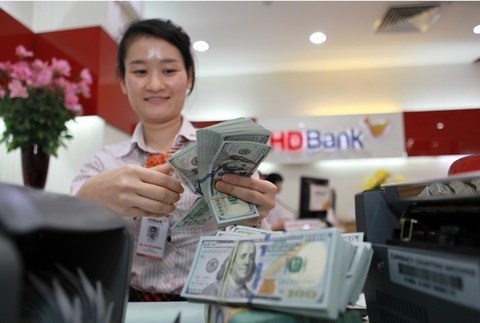 Hanoi (VNA) – The State Bank of Vietnam (SBV)
said it will continue coordinating with concerned Vietnamese ministries and
agencies to communicate with the US regarding the US Department of Treasury’s latest report on macroeconomic and foreign
exchange policies of major trading partners of the US.

The report placed
Vietnam on the monitoring list on currency practice along
with China, Japan, the Republic of Korea, Germany, Italy, Ireland, Singapore,
Malaysia and Switzerland.

The SBV noted it will
also continue implementing monetary policies to control inflation, maintain a
stable macro-economy, support economic
growth and flexibly manage the forex rates in line with market developments and
the monetary policies’ objectives, so as to not create unfair competition in
foreign trade.

According to the SBV, the US Department of Treasury on
January 14 issued a Semiannual
Report on Macroeconomic and Foreign Exchange Policies of Major Trading Partners
of the US which establishes a Monitoring List of countries that merit close
attention to their currency practices and macroeconomic policies.

In the report, the department reviewed 20 major US
trading partners with bilateral goods trade with the US of at least 40 billion
USD annually against the thresholds it has established for the three criteria –
a significant bilateral trade surplus with the US at at least 20 billion USD, a material current account
surplus at at least 2
percent of GDP, and persistent, one-sided intervention occurs when net
purchases of foreign currency are conducted repeatedly, in at least 6 out of 12
months, and these net purchases total at least 2 percent of an economy’s GDP
over a 12-month period.

This is the
second time Vietnam has been named in the report. The country was first mentioned in the May
2019 report as it met two criteria on bilateral goods trade with the US and a material current account surplus.

The January
2020 report keeps Vietnam on the list even though it only met one criterion on goods
trade surplus with the US,
which continues to rise significantly to reach 47 billion USD over the four quarters through June 2019.
Over this same period, Vietnam’s current account balance steadily narrowed, to
1.7 percent of GDP while net purchases of foreign exchange were 0.8 percent
of GDP, it adds.

The report also concludes that during the period, no
major trading partner met all three criteria to be labelled a currency
manipulator./.